The name Salernum seems to date back to the period of colonization and comes from the fusion of nouns and Salum Irnum.
The city of Salerno has a promenade where you can relax enjoying the view of the sea, or where you can enjoy sports activities such as running or a bike ride. The hinterland is characterized by green areas of gardens and public parks such as the Garden of Minerva in eighteenth-century style. Along the way of sightseeing we could spend some time at the shopping opportunities along the Corso Emanuele II and then dedicate ourselves to visit the Cathedral of the city, built in a basilica plan with three longitudinal naves, a transept and a portico. The main entrance consists of a bronze door Byzantine, inserted in a medieval marble portal. The side chapels are decorated with eighteenth-century paintings like the San Gennaro Francesco Solimena and Pentecost Francesco De Mura.
In Salerno you can also admire an ancient medieval aqueduct of the ninth century. From an artistic point of view it is one of the earliest examples of the use of the arch arched.

Not far from the town there is also another important center of Magna Grecia called Posidonia, then renamed Paestum by the Romans.
The town is known both for its archaeological excavations, which for its stretches of beach with facilities equipped. Ideal place to spend a day at sea, and then devote himself to visit the archaeological excavations that hold Greek architecture of the seventh century. 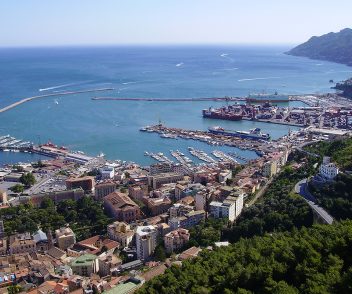